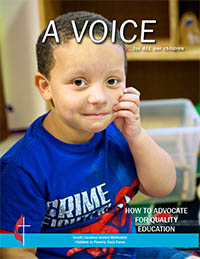 Become and Advocate for All Our Children. Download the Children in Poverty Legislative Advocacy Packet “A Voice” to learn how.

Equip congregations to share in God’s mission by providing hope, compassion, justice, and radical hospitality to children who live in poverty.

The Triune God identifies with, defends, and welcomes “the orphans, widows, and sojourners” and calls us to participate in Jesus Christ’s reign of justice, generosity, compassion, and joy.